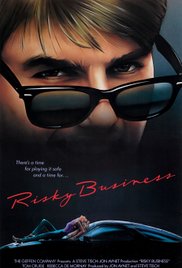 My chum Tim and I watch a film every week, taking it in turns to pick. The only catch? Each film has to be linked to the previous one by a shared actor. We’re looking for classics we’ve missed, hidden gems, oddities and films to reappraise now we’re, uh, getting older.

Tom’s the one on the right

He’s a funny old one, isn’t he? There are some massive Tom Cruise films I’ve never seen, but plenty I have – Legend, Interview With The Vampire, Born on the Fourth of July, Mission Impossible and A Few Good Men all hit when I was at impressionable ages. He’s never less than solid, he’s seldom more than engaging. Oblivion is dull as ditchwater but he holds it together well enough, whereas Edge of Tomorrow (or All You Need Is Kill, or Live, Die, Repeat) was a surprise pleasure. And boy does he look good running.

Risky Business and me

I know the scene from Risky Business. Well, not really the scene. The shot. I know that shot where Tom Cruise slides into shot in his undies. But that’s about it.

I assume it’s a sort of Ferris Buellery thing, but I haven’t seen that either. The whole 80s American teen thing has never really tickled my fancy. I have seen Breakfast Club, that’s one… and… does Lost Boys count? I saw that once… St Elmo’s Fire? Nope. Pretty In Pink? Nope. Sixteen Candles? Fast Times At Ridgemont High? Weird Science? Noooooooooooooooope.

A Chicago teenager is looking for fun at home while his parents are away, but the situation quickly gets out of hand.

Firstly, and most importantly, someone sound the Raphael Sbarge alarm.

Mr. Sbarge on the right

I didn’t even recognise him, he’s so young in it. My love for Mr Sbarge stems from his dulcet tones playing Carth Onasi in the game Star Wars: Knights of the Old Republic. The game itself is fab and directly led to the Mass Effect and Dragon Age series, and the joys of romancing NPCs in games. Largely down to how frickin’ great Raphael Sbarge’s voice acting was. That game man, that and Fable hooked me back into gaming which has become one of my great pleasures.

Anyway. Just imagine the Raphael Sbarge alarm is going off through the rest of this. Next up, Curtis Armstrong. Sure, Tom Cruise looks like Tom Cruise and is all eyes and grin, but I want a film about Curtis Armstrong’s character. He has moxie, chutzpah and other such words. He looks like a slacker, has moxie and is going to Harvard. He sets everything in motion only for Tom Cruise to slide into the frame in his undies and steal the film away.

What’s that I can hear under the Raphael Sbarge alarm? Why, it’s only the Joe Pantoliano alert!

We last saw Joey Pants in buddy cop romp Running Scared. He played a whiny criminal. And here? A whiny (yet slightly smooth) pimp. You need whiny? Get Pants.

And then I suppose we ought to talk about Tom Cruise… He looks almost no different in this than he did in The Firm, despite the intervening years. And he didn’t look that different in The Firm to how he looks now. That’s some dark magick he’s involved in. He’s Tom Cruise. He turned up fully formed. After the scene where he slides in in his undies he dances around the house, ending up throwing himself onto the sofa and gyrating. He was always that Tom Cruise – Oprah shouldn’t have been a surprise.

And the film? That ol’ thing? It’s not what I was expecting. It’s almost a teen sex comedy, and it’s almost something quite searing about capitalism. The Tangerine Dream score makes the film seem like it’s meant to be taken more seriously than I thought, backed up by the odd slow-mo shot. Tom Cruise getting a call-girl because he doesn’t seem able to get a date makes it seem like it’s meant to be taken less seriously. It reminded me of Wolf Of Wall Street in an odd way. It’s up to us to find Cruise reprehensible, the film isn’t going to do it all for us. But the camera zooming in on the black of the sunglasses lens / Cruise’s soul did enough to flag up the intentions. In a society that’s teaching kids to commodify everything, of course making a quick buck from pimping out prostitutes follows.

It’s my choice next, and I’ve got plenty to pick from. As I mentioned earlier, there are some really big Tom Cruise films I should have seen, but then there’s also Raphael Sbarge… He’s not actually in that many films, appearing more on TV and voiceovers. If I’m in the mood for whininess I’m sure Joe Pantoliano is prolific. And there’s also Rebecca De Mornay, the hooker with a heart of gold in Risky Business, who I don’t think I’ve seen in anything else at all… Who knows!

Narrative in games and new media

On publishing, clients, writing, and queries

How Do You Pronounce Eynon?

Thoughts on being a writer, with a little real life sprinkled on top. (All by a chap with a weird surname)

Never leave anything at home again

Cacophony of thought
What Catherine ate next

What do vegans eat? Find some answers here.

A Good Blog is Hard to Find